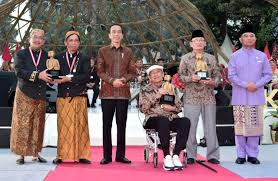 Cultural academics, artists and performers alike that attended the closing ceremony of the five-day event donned attire that reflected the country’s cultural richness, with some wearing traditional outfits from various regions, while others wore batik.

The end of the congress was marked by the handing over of a policy framework to Jokowi called a “cultural strategy”, in line with Law No. 5/2017 on cultural advancement.

In his remarks, Jokowi said culture was always developing, as the mobility of people and information enabled intercultural interaction and exchange. He noted that the development of information and technology had allowed for the fast transfer of data, words and images, as well video, making them accessible to many.

This phenomenon created traffic and interaction of culture that was more intense and complex, Jokowi added, whether it be interaction between groups, nations, notions and even between the old and new. The condition at the same time opened up the potential for tolerance and synergy for the advancement of culture.

“This is why I think it’s not enough just to ensure the availability of a platform for expression. What we need is a platform of interaction with tolerance,” Jokowi said.

The event also recognized three awardees for their contributions to culture, with recipients including the Borobudur restoration team, jointly received by Hubertus Sadirin and Ismijono, as well as litterateur Putu Wijaya and poet D. Zawawi Imron.

Speaking on behalf of the art and culture community, Zawawi expressed optimism on the conclusion of the congress, which he said had succeeded in highlighting the country’s creative cultural richness and ideas on where it was headed.

“The Indonesian Cultural Congress was truly a platform for creativity on how to advance Indonesian culture in the future,” Zawawi said.

Education and Culture Minister Muhadjir Effendy said more than 7,000 people had attended the event, which for the first time in its 100-year history was open to the public, members of which participated in debates, discussions and seminars, as well as showcased a number of performances.

“As it was open to the public, the platform facilitated cultural experts and actors in expressing their ideas,” Muhadjir said.

In addition to the cultural strategy, the congress also produced a set of resolutions adopted by congress participants, as well as those involved in the creation of the cultural strategy. Derived from the strategy itself, the resolution, among others things, includes the facilitation of multicultural expression and a push for interaction to strengthen inclusive culture. (Masdar)
Tags: Culture
Bagikan: