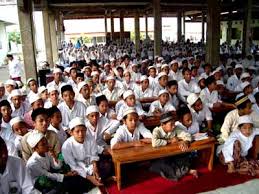 "Santris are expected to have skills after graduation in carrying out economic activities, which is important in daily life," Director General of Small- and Medium-Scale Industry Gati Wibawaningsih stated, when attending an event on the creation of new entrepreneurs within the Lirboyo Islamic Boarding School (Pondok Pesantren Lirboyo) in Kediri, East Java, on Monday.

She noted that 20 thousand students were expected to become new entrepreneurs in the program until the end of 2020.

This program is expected to empower the community to be ready to face the progressing times.

From the data reported by the world economic forum, Indonesia showed an increase in the creation of new entrepreneurs from its original position of 41 to position 36 now.

This increase was inseparable from community participation and the government`s efforts to encourage new entrepreneurs, one of them from the santri.

The director general remarked that the students must be given skills, including being obedient and have a willingness to learn.

Moreover, the world is now entering the era of industrial revolution 4.0, so that everyone, including the santri, must change their previously conventional mindset into a digital mindset.

The Ministry of Industry also provides training for santri. For Islamic boarding schools (PP), tools are provided to empower the santri.

In PP Lirboyo Kediri, the tools provided are, for example, waste recycling machines, machines for making bottled water, and machines to make bread.

In addition to being able to sell directly, the santri is also expected to be able to market the product through internal network.

With that, of course, products can be sent to various regions. Thus, Islamic boarding schools can also be more empowered.

Wibawaningsih noted that until now, there have been 13 Islamic boarding schools in West Java, Central Java, and East Java, which have received programs and facilities from the Ministry of Industry.

Later, in 2019, the ministry will make a program again, so that the target of producing some 20 thousand santris into entrepreneurs can be realized.

Meanwhile, the leader of Kediri`s Lirboyo Al-Machrussyiyah Islamic Boarding School, Reza Ahmad Zahid, pointed out that the PP was indeed trying to encourage the economic empowerment of Islamic boarding schools with various skills.

PP was greatly helped by the various programs that have been made so far. "We are aware that PP is one of the educational institutions that have the potential to drive the wheels of economic empowerment in Indonesia.