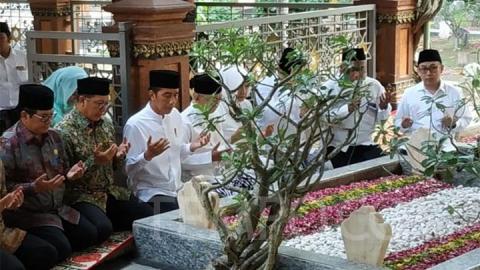 Other than visiting Gus Dur’s grave, Jokowi alo visited the founder of Pesantren Tebuireng, KH Hasyim Asy’ari. Jokowi prayed there and placed flowers to both graves.

Jokowi, before visiting the graves, have an internal meeting with Gus Sholah and Farida.

“The best umara [leader] is the one who visits ulema [Islamic scholars]. Today, he [President] visits NU clerics (kiai) and ulema. I think this meeting during this political period is a really good example,” Soekarwo said.

Jokowi then attended the inauguration site of Museum Islam Indonesia which is located near the pesantren. The museum is built as a tribute for ulema who contributed for the independence of the Republic of Indonesia.