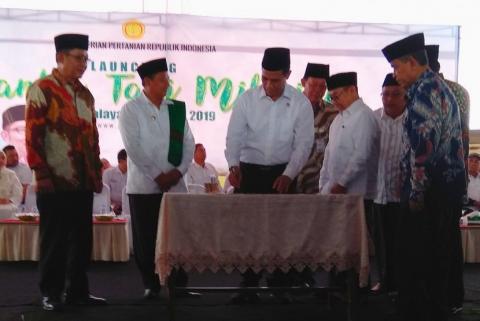 Some 15 thousand santri (Islamic boarding school students) from across the country attended the event held in Kamulyan square of Manonjaya subdistrict in Tasikmalaya. Amran said the program is aimed at encouraging regeneration in the sector, as the growing population would see a higher demand for food, while young Indonesians have little interest in farming.

"Alhamdulillah (thank God) there is new energy for our agricultural sector with four million millennial santri across Indonesia. We have formed a regulation allowing them direct access to the ministry," he was quoted by Antara news agency as saying.

The involvement of santri, according to the minister, is part of a larger campaign of one million millennial farmers in 2019. "This is not just a ceremony but there will be concrete training," he remarked.

The ministry has provided paddy and corn seeds, 102 cattle, 500 sheep, 10 thousand chickens, and farming machinery for Islamic boarding schools. "We hope that pesantren will encourage its santri to become young entrepreneurs in the agriculture sector," he said.