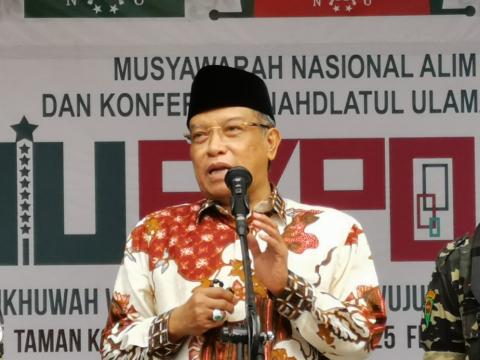 Nahdlatul Ulama
Nahdlatul Ulama
Bagikan:
Banjar City, NU Online
General Chairman of Nahdlatul Ulama KH Said Aqil Siroj said that the 2019 NU National Conference of Ulama took the theme of Strengthening the Wathoniyah Brotherhood for the Sovereignty of the People. that is based on the current situation in Indonesia that will hold hold a people's democratic party.

"That is a simultaneous democratic party to elect president, vice president and representatives of the people in 2019," Kiai Said said at the opening ceremony of the NU 2019 National Conference of Ulema at the Miftahul Huda Al-Azhar Islamic Boarding School in Banjar City, Wednesday (2/27) .

"The true mandate of power is the benefit of the people, the greatest welfare for the people," he said.

Kiai Said added that general elections, whether presidential elections, legislative elections or even regional elections, were not only limited to the arena of succession of power. However, all the elections must be a momentum to continue the commitment to upholding the people's sovereignty. (Muhlishon / Masdar)
Tags: Nahdlatul Ulama
Bagikan: