Gus Dur and Mahatma Gandhi's painting will be displayed in Bulgaria 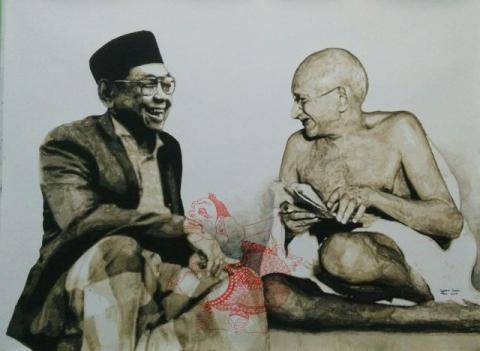 Gus Dur
Gus Dur
Bagikan:
Jakarta, NU Online
The prominent world leaders KH Abdurrahman Wahid (Gus Dur) and Mahatma Gandhi are considered to have inspired the citizens of the world for their struggle and services to uphold religious and humanitarian values.

Both figures are enshrined in a painting made by Djoko Susilo. The painting, according to Mohammad Mahfud MD, will be exhibited in Bulgaria.

"Gus Dur and Mahatma Gadhi painted by Djoko Susilo, will be exhibited in Bulgaria," explained Mahfud MD in his twitter posts.

According to him, Gus Dur is the father of Indonesian Pluralism. However, at this time what was written on his gravestone was Here Rest a Humanist who emphasized that Gus Dur was a humanist.

"Mahatma Gandhi once said,‘ all humans worship God, but only ways (of worship are different.' Tolerance according to both, is the key to peace in life," Mahfud said.

The painting depicts KH Abdurrahman Wahid and Mahatma Gandhi talked in a sitting position and faced each other.

Both are described as laughing at each other. Gus Dur wore a sarong and cap and a shirt wrapped in a suit, while Mahatma Gandhi wore a white Indian sling with a note. Between them there was a red stamp pictured with the character of Semar. (Fathoni/Masdar)