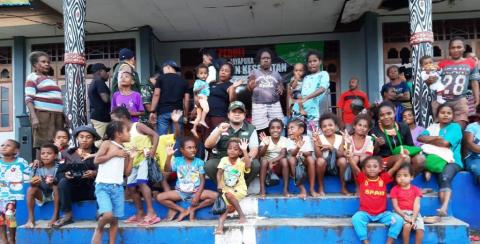 Jayapura, NU Online
The Deputy Regent of Jayapura, Giri Wijayantoro expressed his gratitude to the NU Peduli team for participating with many people in handling flash floods and landslides in Sentani, Jayapura, Papua, which occurred recently.

"Thanks alot NU Peduli. Starting from the beginning, the first day (Sunday), it could attend and take part directly to the points that are in need of help. NU has moved from the beginning I monitored," Giri said here on Friday ( 22/3).

Giri said that he highly appreciated the role of the NU Peduli team which had until now been still taking part in evacuating the victims and establishing the Sentani's NU Peduli Post.

"It also accommodates and facilitates the distribution of assistance to communities affected by disasters," he explained.

"NU Peduli visited the disaster site in the Kemiri River area, in the Sentani District of Jayapura. While in Yakonde Village, Waibu District, we opened a health service post for communities affected by the disaster," Wahib said.

"Hopefully Sentani Jayapura can immediately rise and hopefully the victims will be given sincerity in facing this disaster," Wahib said.

The local government in Papua has planned to relocate residents living in the Cycloop nature reserve area in a bid to avoid future flash floods.

Papua's Governor, Lukas Enembe, had earlier stated that the residents affected by the natural disasters will be moved to Wamena, Jayapura.

"This plan had been approved by President Joko Widodo. We just have to determine the proper location," he noted in Jayapura recently.

According to the governor, Papua's government will discuss building public service facilities, such as hospitals, schools, and housing, for the resettled residents.

"This type of disaster has repeatedly occurred over a period of time, so the residents must be relocated," he added. (Anty Husnawati / Masdar)