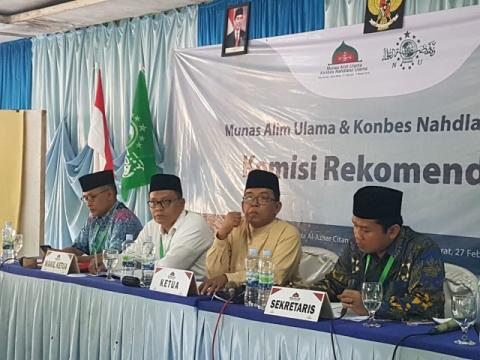 Elections
Elections
Bagikan:
Jakarta, NU Online
The National Meeting and Great Conference of Nahdlatul Ulama (NU) held at the Miftahul Huda Al-Azhar Islamic Boarding School in Citangkolo, Kujangsari, Banjar, West Java, in early March produced a number of recommendations. Among others, the involvement of Nahdliyin in the 2019 elections.

On this stand, deputy chairman of the Recommendations Commission, H Rumadi Ahmad, said Nahdliyin should take part in in the much-awaited elections. Not only did they not accept money politics, they should also be encouraged to fight it.

"Not accepting money that can influence political choice is as weak as faith," Rumadi told NU Online by phone on Monday (25/3).

According to him, the push against the money politics is very important and crucial to be paid attention by all the Nahdliyin. When asked about specific tips on rejecting money politics, Rumadi answered briefly. "One thing that can be done is strengthen your commitment."

In the plenary session, Rumadi read out the results of the Recommendation Commission meeting. Nahdliyin, said the Jepara-born man, should be involved and actively participate in the 2019 election process. The active participation is realized by attending the polling stations to elect presidential candidates, DPR, DPD, DPRD I / II.

"Another important thing is not to pollute elections with money politics, spread hoaxes and slander, and involved in conflict because of political differences," said the chairperson of the Lakpesdam NU.

Rumadi added, we must succeed the elections to improve the quality of Indonesian democracy.

"The 2019 election must be ensured to run safely and produce a legitimate leader. All elements and members of NU must be part of the movement," he said

This lecturer in the Faculty of Sharia and Law at UIN Syarif Hidayatullah Jakarta hoped that the public would realize that money politics is a threat that damages democracy and destroys the morality of the nation.

"About abstentions, if possible, never do it. For abstentions, it means that we have become citizens who are ignorant of the nation's future," Rumadi said. (Musthofa Asrori/Masdar)
Tags: Elections
Bagikan: