Grand Mosque, a trace of Islamic civilization in Surakarta 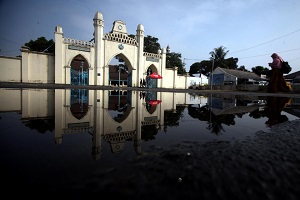 Mosques
Yogyakarta, NU Online
The sound of a drum from the mosque’s verandah could be heard. It was near the juhur (midday) adzan (call to prayer), when many Muslims go to pray at the Surakarta Hadiningrat Grand Mosque.

As reported by The Jakarta Post's Boy T. Harjanto, the Grand Mosque was built by Sultan Pakubuwono III in 1763 and finished in 1768.

The Surakarta sultan has a role as a religious leader in the sultanate.

All Grand Mosque staff have the same privilege as the courtiers.

The architecture of the mosque resembles a three-tier crown. There are also several other smaller buildings in the mosque compounds that serve different purposes. (Masdar)
Tags:
Mosques
Bagikan:
Rekomendasi