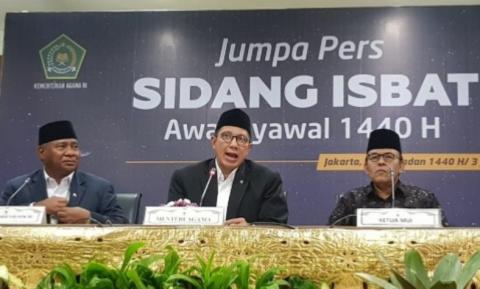 Idul Fitri
Idul Fitri
Bagikan:
Jakarta, NU Online
The government through the Ministry of Religious Affairs announced that 1 Shawwal 1440 Hijriah would fall on Wednesday, June 5, 2019. This announcement was delivered after holding a congregation hearing in Jakarta which was held on Monday (3/6) evening.

Religious Affairs Minister Lukman Hakim Saifuddin chairing the meeting explained that the position of the new moon below the horizon was seen from all corners of the country, with a height of minus 1 degree 26 minutes up to minus 0 degree 6 minutes.

The falakiyah team of the Ministry of Religious Affairs deployed in some 105 points throughout the country from Aceh to Papua, also reported that none of them managed to see the new moon.

This decision is also in line with the predictions of the hisab data issued by the NU Falakiyah Institution in Jakarta which revealed that Monday the ijtima or conjunction occurred at 17:01:42 WIB. The hilal height is minus 0 degree 14 minutes 57 seconds. Theoretically, the hilal is in a position below this type of horizon is very difficult to see.

Thus, the month of Ramadan was completed to 30 days (istikmal), and Muslims still have to fast one more day, Tuesday (4/6) tomorrow.

Itsbat congregation was attended by representatives of Islamic organizations, heads of Islamic boarding schools, astronomers, delegates from friendly countries, and members of the House of Representatives

The country's largest Muslim organization Nahdlatul Ulama (NU) also announced that the beginning of Shawwal 1440 Hijriah falls on Wednesday, June 5, 2019. The Ikhbar is based on the results of the NU rukyat team observations in various regions on Monday (3/6) evening, which failed to see the new moon.