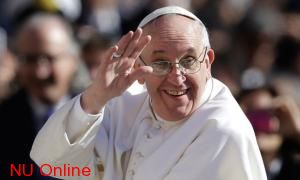 Rome, NU Online
The Al-Azhar University in Cairo – considered one of the most important centres of Sunni Islamic learning – has announced that Pope Francis has sent a personal message to the Grand Imam of Al-Azhar, Ahmed Al Tayyeb, vaticaninsider.lastampa.it. reported.<>

The most important Catholic website in Arabic, www.abouna.org, published the communiqué issued by Al-Azhar, which mentions that a meeting took place yesterday between Al Tayyeb and the Apostolic Nuncio to Egypt, Mgr. Jean-Paul Gobel.

During the face-to-face meeting the Nuncio delivered the message of wishes Pope Francis sent to the Muslim world for the end of the month of Ramadan, along with a personal message from to Pope to Al Tayyeb.

According to Al-Azhar, in his message the Pope stressed the Vatican’s respect for Islam and said he hoped every effort would be made towards achieving “mutual understanding between the world’s Christians and Muslims in order to build peace and justice.”

Al Tayyeb apparently replied that the message Al-Azhar wished to get out is one of “respect for people of every religion and the safeguarding of human dignity and the highest values described in the Quran and the Sunnah.”

He also said that Muslims are willing “to collaborate to help justice and progress grow among the people of the Earth.”

The communiqué issued by the University of Al-Azhar is important in light of the tensions between the Sunni centre of learning and the Vatican, which exploded in January 2011 after Benedict XVI’s strong condemnation of the Coptic Orthodox Cathedral of Alexandria. This led the university to announce it was suspending dialogue with the Holy See.

Prior to this, a university delegation would hold meetings with the Pontifical Council for Interreligious Dialogue every two years. Today’s communiqué alluded to this incident, saying that Al Tayyeb apparently told the Nuncio that casting Islam in a negative light is “a red line” that must not be crossed.

The communiqué does not make explicit reference to the resumption of dialogue. But it is important to bear in mind that in June Al-Azhar said it was waiting for a response to the message of congratulations which Al Tayyeb sent Pope Francis after his election. And it expressed the hope that there would be “a clear demonstration of respect for Islam and Muslims”.

This was clearly demonstrated in today’s message. The President of the Pontifical Council for Interreligious Dialogue Cardinal Jean Louis Tauran responded by saying that it was Al-Azhar that had interrupted dialogue with the Holy See. The Holy See had kept the door of dialogue open.

The facts seem to suggest that this rift is healing fast: Al Tayyeb and the University of Al-Azhar have proven to be an important reference point for Christians during the difficult past few months in Egypt. Even during Mohammed Morsi’s presidency the Great Imam had tried on more than one occasion to act as a mediator with Christians, attracting the wrath of the Muslim Brotherhood.

Then, after the 30 June demonstrations he openly supported the ousting of the Islamist president by the military. Importantly, when Turkey’s president Recep Tayyip ErdoÄŸan attacked him for this, the Secretary of the Council of Churches of Egypt, Fr. Bishoy Helmy came to his defence. The Apostolic Vicar of Alexandria, Mgr. Adel Zaki told Fides news agency that "a strong collaborative agreement between Al Azhar and the Council of Christian Churches is being registered.”