PWNU statements on the Gaza crisis 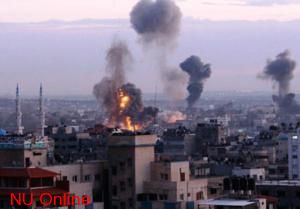 1. The Israeli-Palestinian conflict occurred and has killed some 100 victims during Israeli strikes into the Gaza Strip that have now entered the 4th day, and occurred in the holy month of Ramadan. <>

2. Certainly, this severe situation is regrettable by all of us, not only Muslims, but also the entire human race on this earth. What is happening in Gaza is a humanitarian problem, instead of being caused by such problems as politics and theology.

3. We should be able to look at the long history of this conflict, since the state of Israel was proclaimed by a group of Jews from various western lifestyle-embracing parts of the world which then lead to tensions with the community and the Arab countries that are predominantly Muslim. Such tensions transformed into a series of wars in 1967, 1973, 2006, 2008, 2010 and this year. The dynamics of diplomacy, negotiations and ceasefires have been pursued by various parties, including Israel, Arab countries, Palestine and the United Nations. However, the political process has never reached a consensus, although there are some progress in the political diplomacy.

4. Therefore, the East Java's Regional Board of Nahdlatul Ulama (PWNU) called on Muslims in Indonesia to position the Gaza crisis as a complex problem, and not merely because of the Muslim-Jewish theological perspective, so we will not be trapped into religious sectarianism or anti-Western jargon as shouted by "hardline" Islamists. A crisis is definitely not due to a single cause, then look at the crisis wisely, insightfully, moderately, fairly and looking for a way out and the midpoint is the point of view of NU.

5. On account of the Israeli-Palestinian conflict as a humanitarian problem, then the PWNU can no longer tolerate the Israeli brutal actions in Gaza for violating guarantees of the right to live and human life. Therefore, the PWNU issues a number of statements as follows:

a. Calling on the Central Board of Nahdlatul Ulama, the Indonesian government and international organizations to play an active role in seeking immediate solutions to the crisis. The active role could be in form of taking efforts to soon stop the Israeli attacks on civilians in order to avoid possible increasing number of victims, especially women and children. Darul mafasid (to prevent more damage) must be prioritized and should be pursued seriously in such measures as political diplomacy, peace, mutual understanding between religion, and humanitarian aid.

b. Calling on all NU followers (Nahdliyin) to pray that the conflict could immediately be ended and fellow brothers and sisters in Gaza and Palestine could saved by God of possible more deaths, by reading the so-called Qunut Nazilah either in congregational or personal prayers.

c. Calling on all NU followers (Nahdliyin) to perform the so-called salatul ghaib (prayer of the absent dead), recite tahlil and prayers for the hundreds of victims as a result of the war. All this is part of the Nahdliyin support for the greatness of Islam and the creation of world peace.