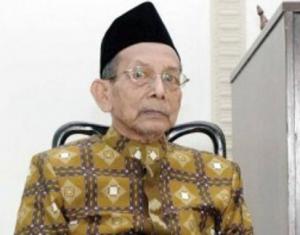 In the eyes of Nahdliyin (NU members), KH Muchith Muzadi have become a legend and living witness for his important roles in developing the organization (jam'iyyah) of Nahdlatul Ulama (NU) from time to time. Imagine, the man born in Bangilan, Tuban, East Java, 90 years ago has "officially" started his prophetic career related to his tireless struggle for the Indonesia's largest Muslim organization since 1941.
<>
In the time, he officially became a member of NU marked with his NU membership card (rasyidul 'adlawiyah). He obtained the card when he became one of the students of Hadratus Syaikh KH Hasyim Ashari at  Tebuireng Islamic boarding school (pesantren) Jombang East Java. Since then, he along with his eleven friends founded the NU Party in Tuban in 1952.  In the same year he also assumed the mandate as Chairman of Ansor Youth Movement of Tuban.

Even when NU was still with Masyumi, Mbah Muchith also served, among others, as the Commander of Hezbollah and member of Board of Representatives of Tuban (1947-1951); Vice Chairman of the Local Government Council (DPD), Regional Secretary of Tuban (1959-1961).

However, Mbah Muchith is still known as being understated. All of his achievements could not attract him to accumulate wealth. He did remember the advice of a senior cleric named KH Munasir Ali, saying. "Chith (Mbah Muchit-ed), in the past older people involved themselves in NU for intending to improve themselves," said Muchit, imitating the Kiai Munasir's statement.

Unfortunately, the Kiai Munasir's message could not fully be translated into action by the NU members. "People have (now,-ed) entered NU for having no intention to improve themseves but to fight for (worldy) position," he joked

His involvement is so great in the formulation of a concept ahead of the NU conference in Situbondo in 1984 which then decides the so-called khittah Jam'iyyah NU, the NU return to the struggle, leaving the world of practical politics. Together with KH Achmad Siddiq, Rais Aam (the Supreme Leader) of NU (1984-1989), Kiai Muchith often referred to as a figure characterizing and coloring the Achmad Siddiq's thoughts and ideas. Almost all the Achmad Siddiq's great ideas were first delivered to Kiai Muchith to be drafted and typed properly, before being disseminated to the public. Including the concept of "Khittah NU, Islam and the phenomenal State Ideology".

At his no-longer-young age, the Mbah Muchit's spirit to continue to fight for NU has inspired each of us. As the prominent figure and Mustasyar (Advisory Board) of Nahdlatul Ulama (NU), Mbah Muchith has, again and again, never tired to encourage the next generation.

As he said on the sidelines of his meeting with the Branch Board of Nahdlatul Ulama (PCNU) Sumenep, some time ago, at his home, Malang. "Love  clerics (kiai) and take care of NU," Mbah Muchit said.

There are no 'excuses to give up' for Mbah Muchith. In such conditions, he has still always been active in various activities of NU. Although such activities take place in in Jakarta or Surabaya, he have and will always participate in while sitting in a wheelchair. "While I'm still alive (I'll do my best for NU)," he said. (Ajie Najm/Masdar)