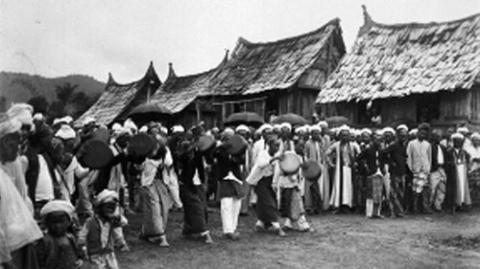 During the Dutch colonial period, religious activities, especially Islam, were severely restricted. Especially, religious activities involving many people such as the Hajj,  Tabligh Akbar (religious gathering) and prayers in congregation. Even someone who will leave for and return from the pilgrimage was restricted in his movements.

For example, when NU held its sixth conference in Cirebon in 1931, the closing of the NU conference was almost restricted for not being permitted to hold the tabligh akbar. However, thanks to the KH Abdul Wahab Hasbullah's negotiating expertise, the ban became soft. NU was allowed to hold a grand closing ceremony as in the previous congresses, namely in Surabaya three times in a row, Semarang and Pekalongan.

Activities to celebrate and enliven religious activities were also prohibited or restricted. Burning firecrackers for example, was once banned by the Dutch East Indies government. The firecrackers certainly has nothing to do with Islam. Its use on Idul Fitri celebrations is considered by some to be heretical because it is not taught by Prophet Muhammad (PBUH) and is not meaningful at all.

However, NU, through the Nahdlatul Oelama News (hereinafter BNO), had a different viewpoint, the firecrackers during the Idul Fitri was part of the Islamic mission. Look for example the viewpoint of one of the writers of a magazine published by HBNO in Surabaya:

The first is to eliminate the crowds of Muslim days showing the big day. The first one said: These firecrackers are not part of the religious teachings. That is indeed true.

Then the writer invited to review the ban on burning the firecrackers at that time.

Where did the anti firecrackers come from? All this goes back to the well-known people ... they don't know about Islam !!! They say it's wasteful. Well, it is true if it is excessive. But are there no other wasteful things they mantain? And if we criticize it, we will be called...rigid???

Apparently the firecrackers were really prohibited at that time. There was nothing other than the Dutch East Indies government. Even if it was not prohibited, the colonial government at that time regulated or limited the use of firecrackers. The magazine was at No. 1 year 10 (estimated in the October 1940 edition), citing news from Balai Pustaka.

On behalf of Legercommandant reportedly:

Because there was a lot of demand from the community with the Idul Fitri, it is now considered to allow people to put firecrackers, so whether they were given permission for the ban or not.

Soon it will be possible to make decision about the firecrackers.

By exploring what has been decided in the article on 28 August 1941 Nr.4068 / G.S. III-9, it was permitted by Leggercommandant to burn firerackers on the night before 1 Sjawal (October 21) and on 1 Sjawal (October 22), but in this case, no matter what was determined or prohibited by Bestuur.