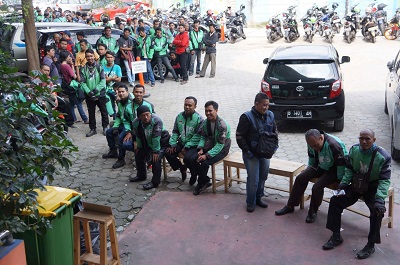 Jakarta, NU Online
The tenet “Ramadan is full of blessings” has inspired some creative people to carry out simple acts of kindness through the #WahyooChallenge, in which customers order food through an app not for themselves but for the courier breaking their fast.

It started as an internal game at a start-up that wanted to encourage its employees to share by ordering food for the couriers.

“We all shared it on our social media accounts [using the hashtag] and it turned out a lot of our friends outside Wahyoo were interested and shared what they did [with the hashtag] with their friends too,” Irma told The Jakarta Post.

Irma said she had done the challenge four times, the latest was by ordering a package of fried chicken, rice and a drink for Rp 40,000 (US$2.77) for the courier.

Initially, most of the couriers were surprised and even expressed disbelief, Irma said.

“The couriers usually got confused, perhaps they were afraid that they just got a fictitious order. Some even went on delivering the food to the marked destination to check whether it was true or not.”

“Perhaps they felt insecure and afraid that some people were trying to mess with them,” she added.

She said she wished more people would be encouraged to do simple good deeds such as through the #WahyooChallenge.

The hashtag, which Irma shared on her Twitter account, caught the attention of 22-year-old university student Hafiyyanti Kusuma Nugraha.

While she was at her campus at the University of Indonesia in Depok, West Java, she ordered three full meals, spending Rp 104,000.

“The driver initially got confused and did not believe it, but in the end he did. It was quite touching when the driver said thanks and prayed,” Hafiyyanti said.

She said as it was Ramadan she wanted to share with the couriers.

“I've done a similar thing before I knew about the #WahyooChallenge. But because the context is the same, I shared my screenshot of the food order to encourage acts of kindness with fellow Twitter users,” Hafiyyanti said.

The challenge also reached those living outside of Greater Jakarta.