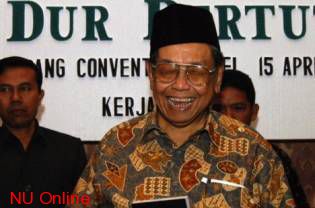 Writing about political humour is a serious business, but KH Abdurrahman Wahid (Gus Dur) was known for his way with words and his love of jokes. Some of his memorable quotes include:<>

Suharto was a New Order president. Habibie was In Order and I am No Order.

There must no longer be anything to differentiate Indonesians based on religion, mother language, culture and ideology.

If today there are people calling Islam bad names, we will teach them that Islam is peaceful.

You don’t realise that losing the presidency for me is nothing ... I regret more the fact that I lost 27 recordings of Beethoven’s Ninth Symphony. (Sudarto Murtaufiq)