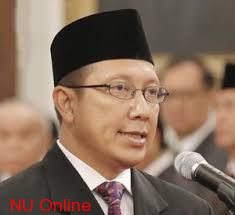 Jakarta, NU Online
Religious Affairs Minister, Lukman Hakim Saifuddin, has called on all religious communities in Indonesia to pray for peace in Palestine.<>

"I call on all religious communities to pray for the people of Palestine and the creation of peace there," the minister said in a written statement here over the weekend.

Particularly for the Muslims who are fasting during the Ramadan, Lukman has encouraged them to perform "Qunut Nazilah" in their prayers for the Palestinians.

"Let us pray that the people of Palestine can be freed from the suffering they are enduring from the Israeli military offensive, and to live in a peaceful atmosphere," he said as quoted by Antara news agency.

The Indonesians should show their solidarity with the Palestinians who are suffering from inhuman Israeli military aggression, the religious affairs minister noted.

The Indonesian government will extend a donation of US$1 million and other humanitarian aid to Palestine, in addition to asking the United Nations to force a truce in the country, according to him.

The minister also appreciated the efforts to raise funds for Palestine, and expressed the hope that the humanitarian aid may reach the right target.