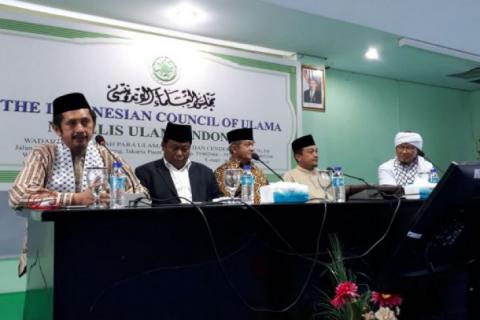 The MUI`s support was delivered during a rally by Indonesian people involving several Muslim organizations at the National Monument in Jakarta on Friday.

The rally demonstrated the Indonesian people`s solidarity to support Palestinians and voice their protest against the plan to transfer the Israeli capital from Tel Aviv to Jerusalem whereas Jerusalem is the future capital of Palestine.

"We fully back the decision of the head of Jakarta MUI Central Board to support Palestine to make Baitul Maqdis the capital of Palestine," Deputy Secretary General of MUI Zaitun Rasmin was quoted by Antara news agency as saying.

The resolution also urged Muslims to oppose the decision of United States (US) President Donald Trump to relocate the US Embassy in Israel from Tel Aviv to Jerusalem.

Moreover, the resolution called on Muslims to offer any form of assistance to the Palestinian people.

Rasmin said that the assistance could be used for the benefit of Palestinians, including for meeting the educational, food, and health needs.

He also urged all countries to support Palestine by cutting off diplomatic ties with Israel.

Meanwhile, he said the MUI had urged all nations to oppose all acts of oppression that are contrary to humanity across the world as had occurred in Palestine, Myanmar, and Pattani.

The rally began with a Dawn Prayer at the Istiqlal Mosque in Jakarta and followed by zikr and shalawat and walking from Istiqlal to the National Monument as well as reading Al Qur`an, speeches from some clerics, and joint statements.

The rally ended by holding the Friday Prayer in congregation at the National Monument.

Some 35 thousand joint personnel of the Indonesian Military and Indonesian Police were on guard to secure the rally.

"The number of people (in the rally) reached hundreds of thousands," Head of Public Relations of the Metro Jaya Police of Jakarta Commissioner Argo Yuwono stated on Thursday.

On December 6, 2017, President Trump had announced the transfer of the US Embassy to Jerusalem and recognized it as the capital of Israel.

The inauguration of the relocated US Embassy will take place on May 14, 2018.

The plan of the US government is drawing criticism from several countries, including Indonesia.

Jerusalem is a holy city for the three major religions of Christianity, Islam, and Judaism. The city has sacred sites of the three religions: the Wailing Wall for Jews, Church of the Holy Sepulchre revered by Christians, and Al-Aqsa Mosque for Muslims. (Masdar)