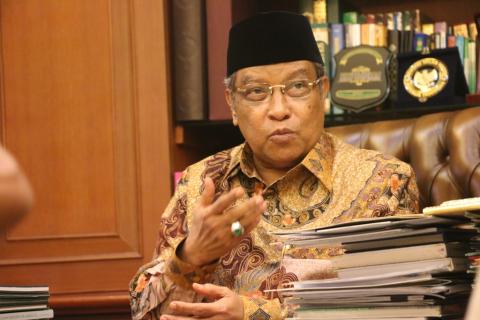 "The ordinary people are like us solely for so-called lita'abbud. If not fasting we are afraid of hell, if fasting we do want go to heaven. This is the fasting lita'abbud," he said at an iftar gathering held at the NU building, Jakarta, Thursday (15/6).

The kiai graduating from such pesantren as Kempek, Lirboyo, and Krapyak likened the lita'abudi fasting as a coolie, for only performing it because of expecting get paid from his /her employer. However, fasting is mandatory because it is obliged by God.

"And I did not create the jinn and mankind except to worship Me," he quoted one verse of the Qur'an. "There is no total dedication except to Allah," he added.

The second kind of fast is litaqarrub, making closer to God. For those who fast at the taqarrub stage, both heaven and fairies are nothing, rewards are not their goal. Because for them the ultimate goal is to be close to God.

Thirdly, the leader of Pesantren Al-Tsaqofah Ciganjur said, "fasting is for so-called litahaqquq, looking for the essence." This type of fasting is when people seek the truth to be on the right side.

According to him, fasting litahaqquq is the maximum fast and its peak is God. Because, the ultimate goal of fasting is God alone. (Abdullah Alawi/Masdar)