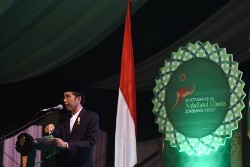 Jombang, NU Online
President Joko Widodo is calling on Indonesia’s largest Muslim organization, Nahdlatul Ulama, to increase its role as a representative of moderate and peaceful Islam and to address the issue of extremism wreaking havoc in the Muslim world.
<>
Joko said NU, which is one of the oldest Islamic organizations in Indonesia and has an estimated 60 million followers across the archipelago, has played a significant part in supporting and preserving the pluralistic spirit of the nation since its establishment in 1926.

He called on NU members to hold fast to the group’s “moderate Islamic values,”  but also increase its role in curbing Islamic extremism by helping address the root cause of the rising global phenomenon.

“NU, which has promoted moderate values of Islam since its birth, can heighten its partnership with various parties in order to build a just global order, especially in regards to eradicating poverty, backwardness and inequality — which are the root cause of terrorism and radicalism,” Joko said in his speech during the opening ceremony of NU’s National Congress in Jombang district, East Java, on Saturday evening.

The president reminded the audience of how NU founding figures had contributed to the establishment of the Unitary State of the Republic of Indonesia — proof of the organization’s commitment to nationalism and pluralism.

“As a role model for the promotion of an Islam which is ‘rahmatan lil alamin‘ [a blessing for the entire universe]… NU members must make Islam their guide in building an advanced community — those who make religion a source of advancement, justice and peace,” he was quoted by the Jakarta Globe as saying.

Joko cited his meeting with British Prime Minister David Cameron, saying the latter had been “impressed” with the role of moderate Muslim groups, such a NU and Muhammadiyah, in promoting a tolerant and peaceful face of Islam in Indonesia.

Cameron visited Jakarta for two days last week to boost bilateral trade and promote British investment in Indonesia, as well as to forge a cooperation between the two countries in addressing the growing threat of religious extremism and terrorism – especially after the rise of the jihadist Islamic State movement in Syria and Iraq.

Joko also touched on the Tolikara incident in Papua, where a small mosque was reportedly burned to the ground as part of a riot during the Idul Fitri holiday last month.

Although Muslims make up the majority of Indonesia’s 250 million population, they are a minority in Papua, where most residents are Christian.

The incident incited hate speeches against Christians across social media platforms – although it was later discovered that the mosque was not intentionally burned, but had accidentally caught fire during a riot.

Still, the brouhaha brought to light threats faced by religious minorities anywhere in Indonesia – whether they are Christians in predominantly Muslim regions or vice versa.

“The Tolikara incident reminds us of the need to continue to build positive inter-religious communication. The degree of tolerance we have worked hard to build must not be marred by a small group of people,” the president said. (masdar)