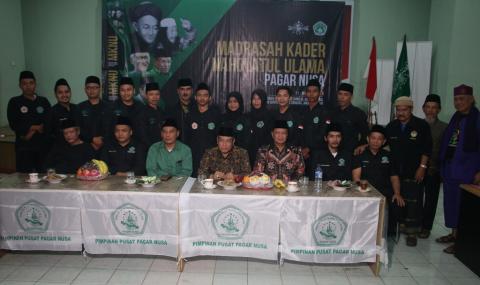 "Out there many Islamic groups have the same religious practices, but the breath of their struggle is different, there are still ones struggling for the Unitary State of Republic of Indonesian (NKRI), but by using violent acts. It is definitely not part of NU. It is not part of Pagar Nusa," he said.

According to Gus Nabil, Pagar Nusa is an Islamic group that always holds NU principles, such as tawassuth, tasamuh, tawazun, and i'tidal.

While in dealing with the nation, Pagar Nusa has a clear concept, namely four pillars: Pancasila, Unity in Diversity, the Unitary State of the Republic of Indonesia (NKRI), and the 1945 Constitution.

The four pillars, Gus Nabil added, were an agreement of the Indonesian founding fathers, including NU figures. In this case, both Pagar Nusa and NU have always upheld the four pillars.

Gus Nabil also stated that the program planned for six days were not only filled with MKNU materials, but also Training of Trainers (TOT). In turn, the management of Pagar Nusa at all levels could hold Pagar Nusa MKNU in their respective regions, such as in Banten, West Java, DKI and Lampung.

"You will, after graduating from here, have one word, one frequency that we are a command under the Central Board of the Nahdlatul Ulama," he explained.

The opening was attended by the General Chairman of NU KH Said Aqil Siroj, Eman Suryaman and H. Aizzuddin Abdurrahman, the Chairman of the MKNU Team Sultonul Huda, and the Chairman of Lazisnu Center Ahmad Sudrajat. Also present were the senior figure of Pagar Nusa Ayip Abbas and Zainal Suwari. (Husni Sahal / Masdar)