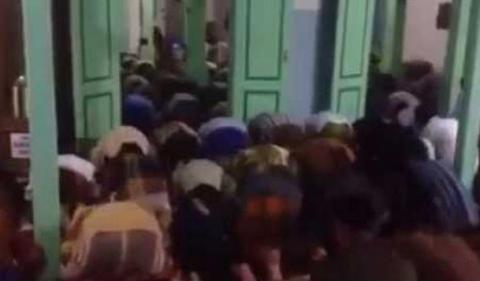 By KH Miftahul Achyar
We are deeply concerned over the super fast Tarawih prayer performed by one of the Islamic boarding schools in Blitar, East Java as reported by media. The super fast tarawih prayer has put aside the substance of tarawih itself.

Linguistically, the word "Tarawih" is the plural form of "tarwihah" that means "taking a break". In practices exemplified by the so-called salafus sholih (the older generation of Muslims), the pilgrims take a break every four cycles (two times salam). The break was taken after they prayed long enough in the four cycles.

The break was filled with such activities as performing prayers and reading the Koran, after the pilgrims performed  a long duration prayer. This is the Qiyamul Lail (night prayer) tradition practiced by the Prophet Muhammad (PBUH) and his companions.

The purpose of prayer is to remember Allah SWT, as explained in the Qurán :

"So worship Me steadfast in prayer to remember me." (Qs.Thaha: 14 )

Therefore, a good prayer should not eliminate the so-called tuma'ninah in every movement. It should not be performed in "a superfast movement".

Note: The phrase "وتضع يديك" in the above hadith in another narration reads "وتمد يديك" (meaning: raise your both hands).

In another hadith it was also narrated:

"If the prayer will be established, do not you stand up to see me. And let you pray in serenity." (Muttafaq Alaih)

Well, if we look at a video showing the superfast tarawih prayer widely circulated in media, apparently, that there is no tranquility (tuma'ninah) at all and it not in line with the definition of tarawih itself.

They did misunderstand their references. Indeed, in terms of the tuma'ninah in i'tidal and sitting between two prostrations (julûs bayna sajdatain) there are differences of opinion in the Shafi'i school of thought. But the tuma'ninah in bowing and prostration, Shafi'ites Muslim scholars have agree that it is such an essential part (rukun) of mandatory, either in obligatory (fardhu) or sunnah prayers. Moreover, this is the tarawih prayer whose the essential meaning is taking a break. Thus, according to Shafi'ites jurisprudence (fiqh), the superfast tarawih prayer is not justified for putting aside tuma'ninah and eliminating the meaning of tarawih itself.

Given the practice has become a quite disturbing debate (especially in cyberspace), there should be measures immediately taken by the Nahdlatul Ulama of East Java (PWNU) to the leader of the Islamic boarding school. The large number of worshipers is good. However, when it comes to damage the value of prayer, it is certainly not good.

Tarawih in Ramadan is a gift of God as our opportunities to perform the so-called munajat, connecting ourselves to the Essence of the All-Everything. We should be capable of utilizing optimally and as good as possible.