'Tolerance must begin with ourselves' 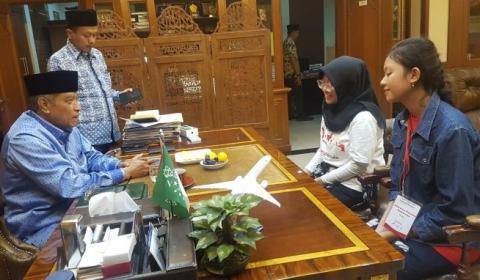 Jakarta, NU Online
Tolerance is actually not a new thing for Septia Febriani, one of the participants of Kakak Sabang Merauke 2019. Because, in West Bandung, West Java, she has lived with heterogeneous communities, including her surrounding neigbors who are Christian families.

However, both stigmatization and generalization of different people still often arise from themselves and their families. Therefore, she participated in the Kakak Sabang Merauke to initially only fill out her college holidays, finally she got more than just filling out her holidays.

The program provides at least three important lessons for her to act tolerantly towards others. First, she said, we must accept and forgive ourselves before leaving. "Before we tolerate others, we must forgive ourselves first. Respect ourselves then respect others," she told NU Online here on Thursday (11/7).

Second, there must be no ones making generalizations or stigmatizing different people. Meet Batak people, for example, who immediately think it will be like being scolded. In fact, she explained, indeed their voice was so loud not because of being harsh.

"We must not have bad prejudice. We have to distinguish between perception and fact. That is the culture (loud voice) instead of willing to be angry with us," Septi said.

Third, the important lesson from the program is we must be easy to forgive others. "Before being forgiven by others, we must be more open-minded (willing to accept) other people," said the student of Padjajaran University.

Living at home with person of different faith, namely Adhyarisa Manyura Rizharinka, as the sister of Sabang Merauke, made her understand and respect the differences around her. "We are more respectful because we did not know each other at all. We took her to church. They also worshiped, we would not get annoyed. Why should you ridicule other people?" she said.

Yuma, the nickname of Adhyarisa Manyura Rizharinka, with Septia held meetings with the General Chairman of NU KH Said Aqil Siroj along with their foster parent who was also the Secretary of NU Health Institute, Citra Fitri Agustina and her husband Rudi Syafruddin. In the short meeting on Thursday (11/7), the girl from Purbalingga, Central Java, got Kiai Said's advice that differences were a strength for Indonesia to unite.

"Different religions should not be a breaker, but strengthen the Indonesian people to unite," said the Social Welfare student quoting the message of Kiai Said. (Syakir NF / Masdar)