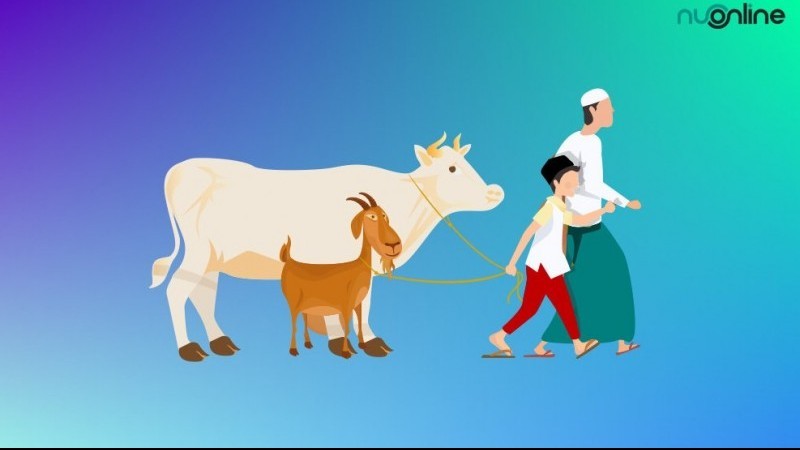 Many scholars have a different opinion about which Prophet was sacrificed by Ibrahim as commanded by God. Is Ismail the eldest son of Ibrahim from his Ethiopian second wife, namely Sayyidah Hajar?. Or Ishaq, the youngest son of Ibrahim from Sayyidah Sarah, the Palestinian first wife. Besides, it is not clearly stated in the Quran and hadith regarding who is sacrificed. Each of the opinions has its own arguments and is also supported by Prophet Muhammad's friends and scholars.

Supporting Argument for Ismail
First, the Prophet said in his hadith that: "I am the son of two people who were slaughtered." Two people slaughtered here are Abdullah bin Abdul Muthallib (Prophet Muhammad's father) and Prophet Ismail. A long time ago, in case Abdul Muttalib (Muhammad's Grandfather) succeeded in digging the Zamzam well, he vowed to slaughter one of his children. After it came true, Abdul Muthallib drew lots to determine who would be slaughtered. The destiny went to Abdullah, but it was canceled and redeemed with 100 camels.

The second person slaughtered is Prophet Ismail as the ancestor of the Arabs or Abul' Arab. If the Prophet Muhammad's lineage is traced, it will surely meet Ismail.

Second, Prophet Ismail lived in Mecca and participated in building Kaaba with his father, Abraham. Moreover, in Mecca, there is a relic located in Mina, namely Al-Manhar, as a slaughter place. It is not for Ishaq since he didn't live in Mecca but in Palestine.

Fourth, Ishaq is the father of Jacob. When God gave Ibrahim the good news about the birth of Ishaq, he also informed that Ishaq would have a son named Ya'qub. So, it became proof that Ishaq will not be slaughtered based on God's news. Indirectly, Allah informed that Ishaq's age would reach adulthood until he has a son.

It was also impossible if Ishaq was sacrificed after having a son as he was old enough. While in the Quran the person slaughtered was around 13 years old, and Ismail was it.

Fifth, it is mentioned in the Quran that Ibrahim is 86 years old, but God has not given children yet. He asked God as stated in Quran As-Shaffat verse 99-100. In this verse, the person slaughtered refers to the first child. Scholars agree that Ismail was the first child. Not Ishaq.

Supporting Arguments for Ishaq
First, as stated in Quran As-Shaffat verses 99-100, Ibrahim moved to the Land of Sham and asked God to bless him with a child. It shows that Ishaq was the Prophet who was slaughtered because he was a son of Sarah, who came from Sham. Then, it is supported by the next verse (As-Shaffat verse 112), which explains the good news from God, that Ishaq is classified as a pious person. It is because Ishaq has passed such a heavy ordeal to be slaughtered.

Second, the Jacob once sent a letter to his son, Yusuf: "... from Ya'qub (Israil) the Prophet of Allah bin Ishaq Dzabihillâh bin Ibrahim Khalîlillâh ...". The phrase 'Ishaq Dzabihillâh' here means that Ishaq is the slaughtered Prophet.

Apart from the differences of opinion above, the most important thing is to take lessons from the story of Ibrahim. We can imitate the love of Prophet Ibrahim to God. As we know, God labeled Ibrahim as Khalilullah as He loves Ibramim very much and vice versa. However, God tested him since his love was almost reduced after he had children.

The family of Ibrahim is a representation of an obedient family. As a father who loves his son very much, Ibrahim sincerely obeys Allah's command to slaughter him. Likewise, the son immediately accepted the command without refusal after knowing that it was God's commandment.

We should also imitate the self-sacrificing soul in the way of Allah from Abraham, such as donate the wealth to the poor or sacrifice (kurban) on Eid al-Adha. Because of the Ibrahimfamily's obedience, they received a blessing from Allah in the form of pious descendants. Ibrahim was also labeled Abul Anbiya (Father of the Prophets) because the prophets after him were his descendants. If we mention the lineage of the Prophet Muhammad, it will surely come to Ibrahim.

Hopefully, we can imitate the obedience of Ibrahim's family for managing our obedient family to God. We know that Ibrahim is willing to sacrifice his son. What about us? Have we sent an animal sacrifice on Eid al-Adha? Wallahu a'lam.