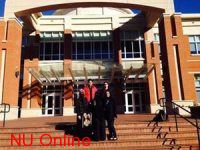 Charlotte, NU Online
A growing number of Muslim students in North Carolina University in Charlotte have demanded a permanent prayer room to accommodate their religious needs during the day, onislam.net reported.<>

“There’s been times when I have class; I’ll pray in the hallway, with students walking by,” Keyona Shears, 22, a public relations major at UNC Charlotte, told Charlotte Observer.

“Privacy-wise, it’s been difficult to find a place to pray.”

Muslims pray five times a day, with each prayer made of a series of postures and movements, each set of which is called a rak‘ah.

The five prayer times are divided all through the day which starts with Fajr prayer at dawn.

As the prayer time falls, Muslim students slip between classes into any empty room to start their daily prayers to Allah.

With no permanent prayer room for Muslim students, Shears usually tries to find a quiet place to perform her prayers.

Shears is one of hundreds of thousands across the nation to take the time to pray between classes.

Sometimes, the library high shelves serve as a shield for her prayers.  Yet, this option is not always enough to provide the necessary privacy.

Though there are no official estimates, the US is home to an estimated Muslim minority of six to eight million.

An earlier Gallup poll found that the majority of Americans Muslims are loyal to their country and optimistic about their future in the United States.

A recent survey found that American Muslims are the most moderate around the world.

It also showed that US Muslims generally express strong commitment to their faith and tend not to see an inherent conflict between being devout and living in a modern society.

Friday was the only exceptions when a special congregational prayer is held in a second-floor room student union.

“Friday is our holy day, just like Jews have Saturday and Christians have Sunday,” he said.

Konsouh would like to eventually find a space on campus where Muslims can regularly go to pray.

“We don’t have a place to actually pray in – like a meditation room, where we can have our daily prayer,” said Konsouh.

“We usually do it at the library at UNCC. We do it outside the union. We do it were we’re at.”

According to Konsouh, UNC Charlotte has a strong Muslim community estimated at 1,500 Muslims.

MSA, a national nonprofit organization founded at the University of Illinois in 1963, has grown to more than 200 chapters throughout the United States.

UNC Charlotte’s chapter began in 2005 as a means to connect the Muslim community, dissolve stereotypes and do good works among local charities.