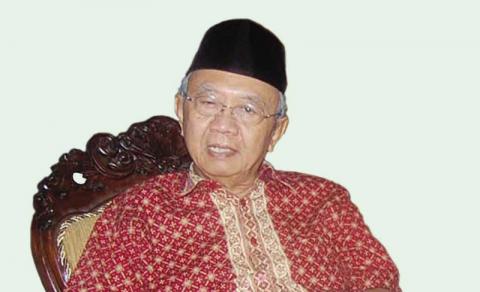 NKRI
NKRI
Jombang, NU Online
The leader of Tebuireng Islamic Boarding School (pesantren), Jombang, East Java KH Solahuddin Wahid said Abu Bakar Ba'asyir and those who agreed with his ideas would continue to fight constitutionally to realize the Unitary State of Republic of Indonesia (NKRI) based on Islam.

Although the struggle will again fail. The number of supporters of such ideas has increasingly been unpopular for not being upheld by more political parties supporting the idea, some of them are still struggling to realize their dreams.

Gus Sholah told NU Online here on Tuesday (19/02) in response to the government cancellation of the Abu Bakar Ba'asyir release having formerly been promised by president Joko Widodo.

"The unconditional release of Abu Bakar Ba'asyir failed because he did not want to accept the terms of loyalty to the NKRI based on Pancasila. Yusril Ihza Mahendra tried to persuade him by stating that Pancasila did not conflict with Islam. Ba'asyir answered, if both are not conflicting, why is not NKRI based on Islam alone?," said Gus Sholah.

Gus Solah said that he had been invited to be a speaker at a seminar held in Sragen by the Ba'asyir-led organization in 2007-2008. At that time Ba'asyir stated that Indonesia must be based on Islam.

"I told the seminar participants that NU, Muhammadiyah, Syarikat Islam, Persis, and others had carried out a similar struggle. History proved that the struggle was not successful," Gus Solah explained.

The KH Hasyim Asyari's grandson said that the struggle had been carried out before independence, then continued in the Constituent Assembly (1956-1959). At that time the leaders of the mass organizations and political parties in the 1950s to 1970s considered Pancasila was in conflict with Islam and Pancasila was secular.

This incorrect assumption arose because Sukarno pioneering Pancasila often made speeches praising Kemal Attaturk, a secular Turkish leader. So, Sukarno was considered by secular Islamic figures and in consequence, Pancasila was considered secular.

"In 1984, the NU Congress officially accepted Pancasila as the state ideology which was then followed by Islamic organizations and political parties," he said.

NU prominent figure KH Achmad Siddiq wrote in 1983 a text on the relatinship between Islam and Pancasila. In the text it is stated that Pancasila is not a religion, cannot replace religion, and cannot be used to replace the position of religion. It is also stated that the principle of the One and Only God as the basis of the state of the Republic of Indonesia according to article 29 paragraph (1) of the 1945 Constitution, which animates other precepts, reflects the so-called tauhid in the sense of faith in Islam.

"It was stated that the acceptance and the practice of Pancasila was a manifestation of the efforts of Muslims to carry out their religious laws," Gus Solah said. (Syarif Abdurrahman/Masdar)