Habib Luthfi: Never blame others for not respecting us 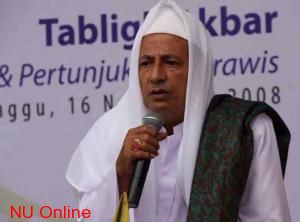 The meeting was attended by religious leaders from Islam, Christianity, Hinduism, Confucianism and some youth organizations such as Ansor Youth Movement, NU Student Association (IPNU), Indonesian Muslim Student Movement (PMII) and so forth.

During the meeting held at the Kanzus Sholawat headquarters Jl. Noyontanan pekalongan Jl.Noyontaan on Wednesday (17/7), habib Luthfi, showing great sense of nationalism, said that his heart had always screamed when he saw the red and white flag was raised because it reminded him of the heroes' struggle having fought for the national independence.

He was disappointed with a group of people who always glorify their descendants and say the Arab descendants are the greatest or Chinese descendants are the most glorious. Though they were all born, lived and died in this land. According to Habib Luthfi, they should be proud of Indonesia regardless of ancestry or religion.

Habib Luthfi also deeply regretted those who could not appreciate what's growing or emerging from this country.

"Some people are still saying Bangkok guava though it grows in Indonesia. Bangkok chicken or montong durian instead of Indonesian durian. If it is so, do not blame when others do not respect us," he said.