NU could sow seeds of Islam Nusantara around the world 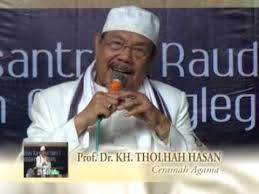 Bagikan:
Malang, NU Online
Islam Nusantara (Islam of the archipelago) having so far been upheld and propagated by the Indonesia's largest Muslim organization, Nahdlatul Ulama (NU) could sow the seeds of Islam Nusantara around the world.

Member of the Advisory Board of Nahdlatul Ulama (NU) KH  M.Tholhah Hasan, popularly known as Kiai Tholhah, made the remarks on the sidelines of a meeting with NU Online here recently.

According to Kiai Tholhah, Islam Nusantara could develop a distinct character that is very different from that manifested by Islam in other Muslim countries, especially the Middle East.

"The Muslim countries in the Middle East, for example, have commonly considered Islam as a socio-religious and even political system that is absolutely “complete,” “final” and authoritative," he said.

He said that "in the country of ours, Islam is in a state of constant learning. For hundreds of years, its leading practitioners have carefully studied social reality, in order to ascertain the most elegant means to achieve their goals in addition to maintaining harmony within a diverse and pluralistic society."

According to Kiai Tholhah, although the model of Islam Nusantara is different from that in the Middle East, this does not mean that it constitutes any form of heresy.

"Prominent ulema (religious scholars) and other Muslim leaders in Nusantara could ensure that the ulema in practicing and promoting Islam adhered to the fundamental Islamic teachings in addition to following its intellectual traditions and maintaining an inseparable bond to the established references of classical Islam."

Even NU with its Islam Nusantara agenda could profoundly sow the seeds of its teachings in maintaining and enriching the civilization of Nusantara as if Islam found itself in “paradise”.

"The Indonesia’s largest Muslim organization could play an important role in addition to enjoying the widest possible opportunity to engage in negotiations with social and historical reality," he said. (Masdar)