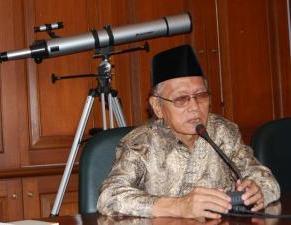 Jakarta, NU Online
Nahdlatul Ulama (NU), the Indonesia's largest Muslim organization through its team of observers did sight hilal (new moon) to determine the beginning of Ramadan 1436 H on Tuesday (16/6). The hilal is still below the horizon so that the 1st day of Ramadan falls on Thursday (18/06).<>

Based on the nautical almanac published by the Lajnah Falakiyah of Nahdlatul Ulama (LFNU) stated that the conjunction (ijtima) occurred at 21:07 pm and the height of the new moon at the time of sunset was 2 degrees below the horizon so the hilal could not be seen and meet the so-called imkanurrukyat.

"The results of hisab (astronomical calculation) have to be tested by deploying the (NU) rukyatul hilal (team) throughout Indonesia," Chairman of LFNU told NU Online here onTuesday.

"In view of NU, the rulyatul hilal has at least three values, namely the strengthening of faith, religious and scientific purposes," he said.

Meanwhile, the Religious Affairs Minister Lukman Hakim Saifuddin announced on Tuesday that the fasting month of Ramadhan would start on Thursday.

Lukman made the announcement after a meeting with representatives of Islamic organizations such as Nahdlatul Ulama (NU), Muhammadiyah, Indonesian Ulema Council (MUI) and others.

"This year, we all will start fasting on the same day. Everyone in the meeting agreed that Ramadhan will fall on Thursday," Lukman said.

Lukman explained that the decision was made based on astronomical measurements by experts employed by the ministry. (masdar)