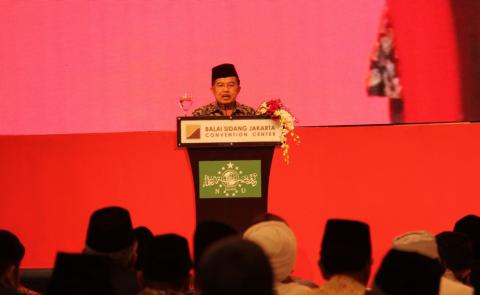 Jakarta, NU Online
Member of the Advisory Board of Nahdlatul Ulama M. Jusuf Kalla has said unity and integrity among nations is needed to address issues such as radicalism and terrorism.

"Problems being faced by the Islamic world, however, could not be easily solved just in conferences. These need unity and integrity among us," Kalla said in his opening remarks at the first International Summit of Moderate Islamic Leaders (ISOMIL), here on Monday.

The presence of 1.6 billion Muslims in 57 countries across the world should be a power to spread word about the virtues of Islam, he argued.

"Certainly, we want moderate Islamic states that give us a sense of purpose, because Islam is a religion that teaches compassion and goodness, and unites all of its followers. That is our goal and ideal," he explained at the opening ceremony which was also attended by former president Megawati Soekarnoputri.

The Supreme Leader (Rais Aam) of NU KH Ma'ruf Amin informed that the two-day conference was aimed at reminding the participants of the importance of preaching the path of moderation at a time when radical groups have been emerging.

The Isomil is a follow up to the Organization of Islamic Cooperation (OIC) summits, held recently in Jakarta and Turkey.

"The OIC summits were attended by state leaders, and ISOMIL is a meeting of ulemas," General Chairman of NU, KH Said Aqil Siroj, popularly known as Kang Said, explained.

Kang Said said President Joko Widodo had called on him to organize the meeting as part of the efforts to prevent the spread of radicalism in Indonesia and other friendly countries. (Masdar)