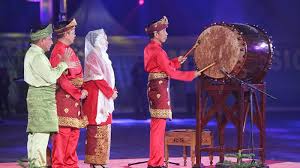 NKRI
NKRI
Medan, NU Online
President Joko Widodo (Jokowi) has expressed belief that the 27th National Qur'an Reading Competition (MTQN) would function to strengthen the nation's unity. He explained the MTQN aims were to foster the love for the Qur'an among Muslims and then practice it well for the benefit of the nation, republika.co.id reported.

Jokowi expressed hope that the MTQN would serve to strengthen Islamic teachings that must be translated into daily life. In this way, the president believes no more slander, hoax, and scorn news would be spread solely due to political interests and ego.

"Muslims must foster a sense of brotherhood and unity and uphold harmony among the Indonesian people. This is the strength and energy of Indonesia," Jokowi remarked at the opening of the Qur'an reading competition at the Astaka Building here on Sunday.

Jokowi, who wore traditional red Malay clothing, beat the Begud and Gondang IX to mark the opening of the 27th MTQN. In the meantime, North Sumatra Governor Edy Rahmayadi was content that the province was pleased to host the MTQN.

For North Sumatra, the governor noted that the implementation of MTQN offers the necessary momentum and motivation to do hard work and make endeavors to provide the best contribution to the welfare of dignified North Sumatra people.

He said that not only Muslims but also other religious communities were delighted over the implementation of the MTQN. He stated that the MTQN in North Sumatra was followed by 1,555 participants from 34 provinces.

Religious Affairs Minister Lukman Hakim Saifuddin remarked that the opening of MTQN in North Sumatra was delayed by a day owing to President Jokowi's enthusiasm to be able to open the event.

The minister believes that since the benefits offered by MTQN were wide-ranging, the implementation must be successful, with positive results.

"Registration with 'finger print' until the judging process through digital applications is one of the efforts made by the government for the successful implementation of the MTQN," he added. (Masdar)