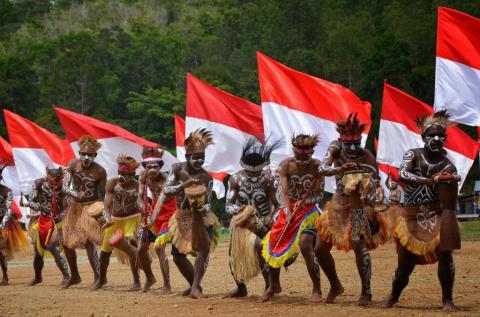 On December 1, 2018 a number of students from Papua in Surabaya, East Java, held a rally with demands for determining their own fate. On December 2, there attacks against some 19 workers building a bridge in Dunga regency and a soldier whose post was attacked. This situation makes us aware that the Papua's problem requires a comprehensive solution.

The issue of Papua, formerly known as Irian Jaya, was an old problem and even emerged with the end of the Dutch colonial era. The Netherlands did not want to surrender Papua as part of Indonesia's territory. The UN then facilitated efforts to determine the fate through polls with the results of joining the region to the territory of Indonesia. But the seeds that arise from groups willing to liberate themselves still exist. This armed groups from time to time have tried to bring about disturbances and attracted international attention.

Indonesian presidents from time to time have tried to solve this problem with various approaches. President Soeharto emphasized the security approach by sending military personnel to the Indonesia's easternmost region. Facts prove, these efforts were less successful as happened in other regions that also tried to separate themselves as in Aceh.

KH Abdurrahman Wahid (Gus Dur), in his brief presidency, tried to make a humanitarian approach to the Papuans, including changing the name of Irian Jaya to Papua as the aspirations of the Papuans.

Now, President Joko Widodo is trying to carry out massive development in areas where the infrastructure conditions are far behind other parts of Indonesia. Another policy is to generalize gasoline prices in Papua and other parts of Indonesia. The price of cement which used to be very expensive has now been lowered far, even a cement factory is being built there. The intensity of President Jokowi's visit to the region was very high compared to other regions. This is an effort to capture the aspirations to resolve this complicated problem.

The problems that occur in Papua are very complex. There are problems of economic injustice felt by the people there who feel that their area is rich in natural resources, but all this has only been enjoyed by outsiders. Papuans have remained poor and underdeveloped. There are unscrupulous actions by the apparatus that they feel are repressive towards their family members, which then raise such a revenge, which is constantly reminded and maintained in their collective memories.

In fact, the problems in Papua are also caused by their own local leaders. The region's corruption index is the lowest compared to other regions as the results of a survey conducted by the Corruption Eradication Commission earlier in 2018. The Papua Provincial Government only scored 52.91 from a maximum score of 100. This shows that corruption is still a big problem faced by the people of Papua. A total of Rp 67 trillion was disbursed to Papua as a special autonomy fund, between 2001-2017, but it gave no significant impact for the Papuans.

This unfavorable situation could be used by foreign parties to pursue their interests in the name of human rights or others, whereas behind all this there may be possible hidden interests that are actually more important such as economic and political interests. We must understand these motives. And solving the problems will eliminate the potential.

We are optimistic that problems in Papua can be resolved, but must be through many approaches. The government's efforts to carry out massive development in Papua are an effort to catch up, while removing the sense of injustice. The sense of security of the Papuans must also be maintained but with a more humanist approach. What does it mean for various types of development and all kinds of facilities if there is no sense of security.

And the most important thing is that how to gain sympathy from the Papuans, that they are an inseparable part of the Unitary State of Republic of Indonesia (NKRI). We can study from other countries such as Scotland or Catalonia in Spain. Even though the region is prosperous and its physical development does not differ greatly from other regions in the country, aspirations to liberate itself still appear in some of its citizens.

We have succeeded in dealing with efforts taken by Aceh people to separate themselves by calling themselves as the Free Aceh Movement (GAM) with a number of approaches. The same thing can certainly be done in Papua. In addition to the programs that should have been carried out such as improving development and maintaining security, a creative approach is needed in solving the problem.

The longer the problem is not resolved, the more will be disadvantaged. A lot of energy must be devoted to solving the problem. The community will always live in a heightened atmosphere of fear, the development process could no longer run smoothly and any other annoying things due to various other problems that follow. And the most disadvantaged from this atmosphere is the people of Papua themselves. (Achmad Mukafi Niam)