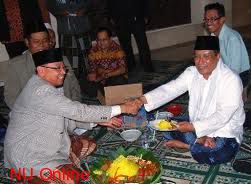 Jakarta, NU Online
Chairman of the Advisory Board of Nahdlatul Ulama, KH Ahmad Ishomuddin said, since the beginning NU had appreciated the local culture. As long as the culture does not violate Islamic law (syari'a), all practices having long been rooted in the community should not be disturbed.<>

"Why does NU most appreciate about matters of culture? Because there has been a principle of Islamic jurisprudence in religion," he told NU Online here on Wednesday (20/12).

Kiai Ishom said, the principle reads "La yanbaghi al-â€‹â€‹khuruj min adatin nas illa fil haram" (it is not appropriate to leave the culture of the people as long as it is not forbidden /haram).

According to him, the NU's principle is quite effective in propagating Islamic teachings. An Islamic scholar could gently engage his targets of preaching without meeting a lot of resistance.

Kiai Ishom spoke about his experience in mediating a conflict between traditional leaders and clerics that occurred in West Nusa Tenggara. The clerics strongly rejected any culture at wedding ceremonies violating Islamic law, such as drinking alcohol.

Instead of being followed, the clerics' resistance even sharpened tensions in the community. In fact, formerly Islamic the standing tradition had been Islamic, but because of the development of the local culture, the wedding party has now changed.

Kiai Ishom then made â€‹â€‹a deal to keep the cultural habits conducted by local people by eliminating such activities as drinking alcohol.

"I could address the problem through the strategy of al-jam'u wat taufiq or compromise for not being detrimental to the traditional leaders and opposed to the religion," Kiai Ishom said.

The caregiver of the Syaria Consulting rubric of a print media also said that "culture is constantly evolving, so it requires people to continually adapt to its changes."