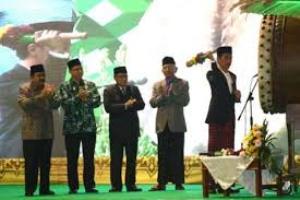 Jombang, NU Online
President Joko “Jokowi” Widodo opened on Saturday the 33rd national congress, or muktamar, of the Nahdlatul Ulama (NU), the country’s largest Islamic organization, in Jombang, East Java, which held the theme ‘Islam Nusantara for Indonesia and World’.
<>
“NU has used religion as a source of tolerance, peace and progressiveness,” Jokowi, who wore a black suit and red sarong, said in his remarks.

He hoped that Islam in Indonesia could inspire the world and contribute to peace amid violence and radicalism.

NU general chairman KH Said Aqil Siradj reaffirmed NU’s stance on upholding Islam, which is rahmatan lil alamin (blessing for the universe), moderate, tolerant and in line with the congress’ theme of reaffirming Islam Nusantara (Islam in the archipelago) for Indonesia and the world.

Said explained that Islam Nusantara was rooted in Indonesian tradition.

“Islam Nusantara is based on religious spirit, akhlakul karimah (good deeds). It is also based on nationalism, diversity and humanity” he said.

NU observer Martin van Bruinessen of Utrecht University, the Netherlands, said Islam Nusantara was Islam that was practiced in the context of culture, which differentiates Islam in Indonesia with that in India, Turkey and Pakistan.

“It’s part of the culture, not the core of Islam,” Bruinessen told The Jakarta Post.

He said Islam in Indonesia was relatively more tolerant toward minorities within Islam, such as the Shiites and Ahmadis.

Thousands of people from across the country and some from overseas, crowded Jombang’s alun-alun (town square), the venue for the opening ceremony of the muktamar.

The congress itself will run until Aug. 5 and discuss several contemporary issues in the Bahtsul Masail (problems deliberation) forum, among other things, imposing the death penalty on graft convicts and the status of the Healthcare and Social Security Agency (BPJS Kesehatan) in the view of Islam.

The Indonesian Ulema Council (MUI) recently stated that the current implementation of the national health insurance (JKN) program, which is managed by the BPJS Kesehatan, was not in accordance with sharia.

A source at the congress told the Post on Saturday the congress would issue an edict that BPJS Kesehatan was halal (permitted) in Islam.

The Bahtsul Masail forum has prepared five answers and a theological basis on BPJS Kesehatan. The material said that BPJS Kesehatan was categorized as an aqad ta'awun (insurance agreement) and that the program did not involve riba (interest). (masdar)