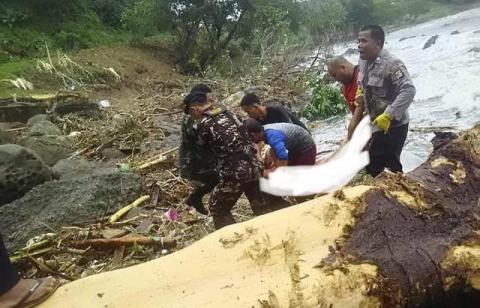 Disaster
Disaster
Bagikan:
Jakarta, NU Online
The empathic action has always carried out by members of the Ansor Multipurpose Front (Banser) in any humanitarian tragedy, including a tsunami that hit coastal areas of Banten and Lampung provinces. Banser immediately took part along with the local authorities to help the victims.

The Chairperson of Ansor Youth Movement H Yaqut Cholil Qoumas showed the struggle of a number of Banser members who were evacuating tsunami victims while making a prayer. Hundreds of Banser members helped the victims both in Banten and in Lampung.

"a deep grief for Lampung and Anyer. Hopefully the injured will get better soon, the missing people will be found soon, and the dead will be in a good end, and the recovery will be hastened," Gus Yaqut said on Sunday (12/23).

Banser has a task force or an organizational wing called Banser Siaga Bencana (disaster prepared Banser/Bagana). On this stand, Banser has responsibility to collaborate with the government in terms of disaster management.

"We were assisted by hundreds of Banser members in the field. They went down to do the sweeping and evacuation steps. We provided assistance in the form of food packages, hygene packages, decent clothes, blankets and tents," Secretary of NU Care-LAZISNU Abdurrouf Amin said.

As reported by The Jakarta Post, at least 222 people have died as a result of a tsunami that hit beaches of Lampung and Banten on Saturday night, the National Disaster Mitigation Agency (BNPB) announced on Sunday.

"The material damage includes 556 houses, nine hotels, 60 [eateries] and 350 ships or boats that were heavily damaged," BNPB spokesperson Sutopo Purwo Nugroho said in a statement on Sunday. "There were no foreign victims, all are Indonesian citizens."

He said that the number of casualties was expected to increase, because not all victims had been evacuated and not all community health centers had reported the number of patients they were treating.

"Heavy equipment has been deployed to help with the evacuation," Sutopo said. "At the moment, five excavators, two loaders, two dump trucks and six water tankers are in the field."

He added that the number of evacuees was also still being estimated. (Fathoni/Masdar)
Tags: Disaster
Bagikan: