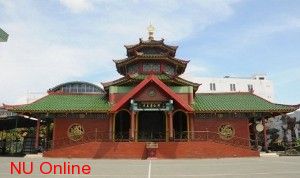 Dozens of Chinese Muslims dressed in white and they stood in rows to conduct Idul Fitri prayer. Sometimes staff member would check every row, to make sure that no more empty space left.

"Come Sir, It's s still empty in the front row," said one of staff on Thursday.

Cheng Hoo Mosque is quite different from Muslim worship place in general. Its entrance resembles a pagoda, there is also a statue of a lion and dragon decorated with reliefs say "Allah" (God) in Arabic. Chaplain of Cheng Hoo Mosque, Haryono said it was unique and attracted tourists. Cheng Hoo Mosque is measured 21 by 11 meters and estimated to be able to accommodate 2,000 whorshipers.