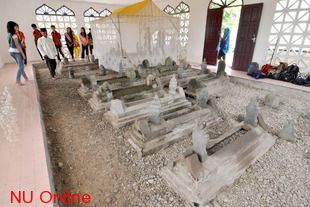 Palu, NU Online
The tomb of the first Islamic preacher in Palu, Sheikh Abdullah Raqie – commonly known as Datuk Karama – has become a popular tourism destination since opening to visitors in 2010. <>

"After its official inauguration, we handed over management of the Datuk Karama tomb to the Palu Tourism Agency," Palu Mayor Rusdi Mastura told Khabar Southeast Asia. "Tourists' enthusiasm to visit the tomb of Datuk Karama has been increasing each year, not only among local tourists, but also international."

Datuk Karama was a scholar from Minangkabau, West Sumatra who came to Palu in the 17th century and visited Lere during his first trip, tomb caretaker Aziz Muhammad said.

Datuk Karama arrived during the Kabonena Kingdom era led by King Ipue Nyidi. He spread Islam to areas inhabited by the Kaili Tribe, including in the regencies of Donggala , Sigi, Parigi Moutong and Tojo Una-Una.

"With a persuasive method along with charisma, Datuk Karama was able to spread Islam through preaching at a number of cultural ceremonies ," Aziz told Khabar. "This approach was slowly accepted by King Ipue Nyidi and the people of Kaili."

Datuk Karama chose to stay in Palu. The city has one of the highest concentrations of Muslims in Indonesia, at 99.8%.

His cultural influence remains. The kakula – a traditional musical instrument of the Kaili Tribe of Central Sulawesi – is the same as the talempong of the Minangkabau.

Dewi Rahmawati, a student at Atmajaya University in Yogyakarta, recently visited the tomb as part of her dissertation research.

"We want to pay respect and send our prayers," Rahmawati, who is writing about the spread of Islam in Palu, told Khabar.