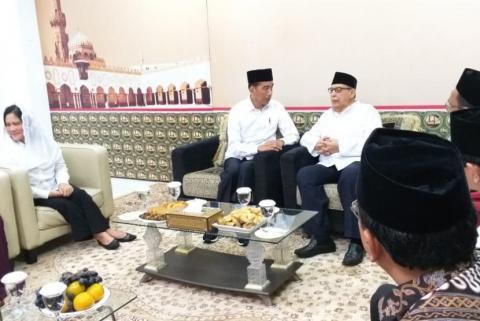 "Alhamdulillah, I'm able to visit and meet with Pak Quraish Shihab, Prof. Nasaruddin, at the Center for the Quran Study in South Tangerang. We've discussed a lot of these things, but the main point was about Islamic moderation," Jokowi explained after meeting at Bayt Alquran Islamic Boarding School on Friday (25/01).

As reported by Republika.co, Quraish also conveyed his input regarding realization of Islamic moderation in Indonesia. Quraish said that the Bayt Alquran Islamic Boarding School itself was the center of Islamic studies that highlighted the moderation in Islam.

"Alhamdulillah (our opinions) were warmly and attentively welcomed (by president). I think that is why the world needs moderation not violence," Quraish said.

The presence of the pesantren was expected to be able to answer the needs of reliable hafiz skills.

"Hopefully after the students have attended education here, they will return to the community with extensive scientific insight, and can work independently for a more decent life," Quraish said. (Masdar)
Tags: Tolerance
Bagikan: