Not only as a truth holder, Kiai Said wants NU to be a policy maker 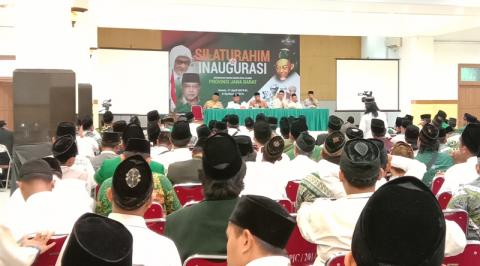 Bagikan:
Bekasi, NU Online
Nahnu ashabul haq. Al-haqqu diini, wal haqqu wathoni. We are truth practitioners, true in the practicing religious teaching, and true in the way of the state life.
The statement was said by The General Chairman of Nahdlatul Ulama KH Said Aqil Siroj and followed by alumni of Madrasah Kader Nahdlatul Ulama (cadre school of NU) throughout West Java province at Islamic Center Bekasi, on Thursday (11/4).
According to him, the position of NU has been right in the context of religious and state life. But, he stressed that recently, NU is not a policymaker. So, some idea from NU was difficult to be implemented.
"I am the general chairman of NU, to defend Palestina, as an example, is difficult to be heard. But if the voice comes from the palace. It will be heard," said the head of Pesantren Luhur Al-Tsaqafah Jakarta.
Likewise Pesantren Law, Kiai Said stressed, if NU voiced in order pesantren to be noticed by the government, it will not be heard. It will different if the people who proposed was president or vice president
"Definitely heard and then approved by parliament," said doctor of philosophy and theology from Ummul Qura University, Saudi Arabia.
So, NU will not only to be a truth holder in religious and state life. "But, we are ashabul haq, also ashabul qarar. We are truth holder, and we are truth policyholder," he said the final statement. (Aru Elgete/Muiz)
Tags: said aqil
Bagikan: