Kiai Said calls on Nahdliyin to be strong in all aspects 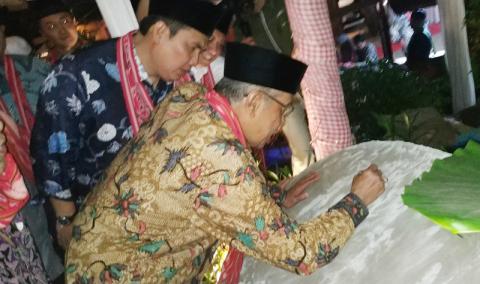 Nahdliyin
Nahdliyin
Bagikan:
Jakarta, NU Online
Times are very dynamic, growing so rapidly with various innovations and challenges that arise from various sectors. This must brilliantly be responded by the Indonesian people, especially Nahdlatul Ulama (NU).

On this stand, Chairman of Nahdlatul Ulama (NU) KH Said Aqil Siroj called on all Nahdliyin to keep strengthening the NU generation from various aspects of life.

At the Grand Opening of the Nahdlatul Ulama Bengkel Kreatif Hello Indonesia (BKHI) held on Sunday (19/5), Kiai Said emphasized that such efforts need to be carried out so that future generations could be strong.

Kiai Said added that the NU currently had 31 universities throughout Indonesia. According to him, this has contributed positively to the development of the capabilities of Nahdliyin and the Indonesian people, even abroad.

He welcomed the presence of the BKHI initiated by Nurkholis to develop the potential of the community, especially the santri in their artistic abilities. In fact, he recruited young people who were previously unemployed. "They can be accommodated to become young people who have skills," he said.

Reportedly, Nurkholis's efforts, said Kiai Said, were supported by Japanese businessmen who offered investments in Indonesia. When talking with him, the leader of the Al-Tsaqafah Islamic Boarding School suggested to start from small things to more address the need of NU members.

"Don't be too elite first, because the basic is in the countryside, so the first step must address the need of Nahdliyin first," he told Nurkholis.

Therefore, the Trustee of the Art Foundation for My People (YSUB) believed that NU in the future could play an important role in all fields in the community. "God willing, in the future we will have time for giving best services to the ummah," he concluded.