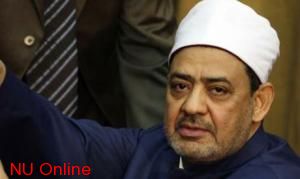 Cairo, NU Online
The head of Egypt's Al-Azhar said Monday that militants of so-called Islamic State of Iraq and the Levant (ISIL) were "criminals" serving a "Zionist" plot to "destroy the Arab world."<>

"These criminals have been able to transmit to the world a tarnished and alarming image of Muslims," Sheikh Ahmed al-Tayyeb said.

"These fundamentalist terrorist groups, whatever their names, and their backers are colonial creations that serve Zionism in its plot to destroy the Arab world."

Al-Azhar is Egypt's top religious authority and runs a university long seen as one the most prestigious centers of Muslim learning.

Egypt’s top religious authority has also previously condemned ISIL, describing it as a corrupt, extremist organization that is damaging Islam.

“An extremist and bloody group such as this poses a danger to Islam and Muslims, tarnishing its image as well as shedding blood and spreading corruption,” said Al-Azhar’s Grand Mufti Shawqi Allam, the state news agency MENA reported.

Egyptian media reports said Allam also expressed his objection to “widespread error” in referring to the group as “the Islamic State,” its new name, because it violates both long-established principles of Shariah and the contemporary foundations of humanitarian law.

Allam said ISIL actions strengthened the hand of those who wanted to harm Islam.

“[They] give an opportunity for those who seek to harm us, to destroy us and interfere in our affairs with the [pretext of a] call to fight terrorism,” Allam said.

The comments came as the Vatican called on Muslim religious leaders to take a “clear and courageous stance” and condemn “unspeakable criminal acts” by ISIL.